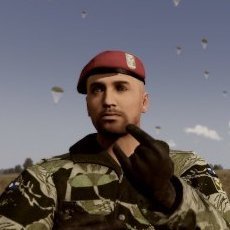 Greetings ArmA Fellows !   Today I release the fisrt version of the Altis Parachute Regiment - for Global Mobilization (development thread here)   Please read the info below and I hope you will enjoy it !   Cheers,   GFT       STEAM  Item: https://steamcommunity.com/sharedfiles/filedetails/?id=2066249929   7-Zip Archive (V1.01): https://we.tl/t-HW43FygtfP How to install: https://www.instructables.com/id/How-to-Install-Non-workshop-Mods-With-the-ARMA-3-L/   NEW - Source files: Changelog:   The Altis Parachute Regiment is a new faction for Global Mobilization adding troops from the airborne units (Paratroopers and SAS squadron) of the Altian armed forces during the colonial time and the cold war era (1980’s).     Background:     Pictures:   Features: One new faction (NATO side), including Altian airborne forces and SAS squadron men Retextured Global Mobilization & A3 base game uniforms & equipment, in Fictional DPM and Brushstroke pattern, adapted from AAF camo palette New assets ported from A2: Headgear (helmets), Weapons (FAL, GPMG-like machine gun, MP5sd) Retextured Vehicles (two pattern, Altis camouflage & plain green), and new markings Static line parachute (see Credits and Acknowledgements) and scripted drop system waypoints   Credits & Acknowledgments: BI Studio for the A2 source files  GM team for the templates of their assets toadie2k for the FAL animation  (https://forums.bohemia.net/forums/topic/163106-toadies-smallarms-and-animations-for-arma3/) Deltagamer for the Static line Parachute model and animation (see https://forums.bohemia.net/forums/topic/181542-static-line-parachute-mod/) Killzonekid for his Paradrop functions (adapted from http://killzonekid.com/arma-scripting-tutorials-epic-armour-drop/) IndeedPete for his templates (which I adapted ) CUP for allowing to unpack their PBOs, which allowed me to learn how to code (but I did NOT use their assets) Drongo, for his config creator Skiddy, yevgeni89 from the BI forums for their suggestions The ARMA community for collecting and sharing the documentation on modding   Disclaimer: To be used at your own risks! I don' take responsibility in case of unexpected damage to your system I don't play MP, so if you encounter bug, please report and I'll try to fix it Compatibility with other mods (Alive, ACE): Not tested yet Compatibility with ZEUS: Normally yes, but not tested No other dependencies than Marksman and GM DLCs; otherwise this is standalone   Known bugs/Future Plans: This is not supposed to be ultra-realistic and honestly there could be some anachronisms, but it gives my vision of a fictional unit using available assets. It is limited by my skills and the time I can spend on it, so you could probably find higher quality mods or models - still, I don't think this is redundant with existing materials. I tried however to make as neat and smooth as possible, this is the least of courtesy to the potential users. If there are any bugs to report - please let me know, and I'll try to fix it (it will be an opportunity for me to learn something new). The code of the config could probably be optimized - I have not seen any bugs, missing relationship popping up on my system, but it is always, so please let me now No Groups yet - to come in subsequent update No plans for future assets, but that could come ! I will release the source files (texture templates, ported 3d model etc...)     License: Arma Public License Share Alike (APL-SA) https://i.imgur.com/wEXj2g0.png
https://www.bohemia.net/community/licenses/arma-public-license-share-alike
Please consider extra requirements if you want to reuse the Static Line Parachute (see https://forums.bohemia.net/forums/topic/181542-static-line-parachute-mod)